I present to you the eighth chapter of BLOOM, a Round Robin Blogvel started by Michelle Simkins, where every chapter is written by a different author. Below you will find a table of contents to get you caught up on what you missed and to tell you where to go for the rest. I really enjoyed writing my addition to the story and my critique group seemed to enjoy it. I hope the rest of you do as well!

Chapter 5–Report from a Fugitive

Chapter 6–Words from the Woods

Chapter 16–In the Jungle 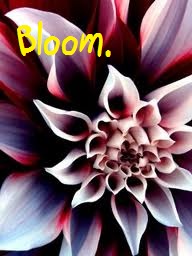 Wanda caught Jessica by the elbow and steered her toward the Jeep. She struggled to keep her grasp gentle as to not frighten the girl, but once Wanda wanted something, she got it. Her coworkers equated her to a steam engine, a remark she took as the highest praise. They also called her a redheaded harlot behind her back, which she didn’t appreciate quite as much. Wanda eased up as they tromped through a thick of still-green foliage. Here, the woods remained untouched by Jamie’s “little experiments”, though it wouldn’t be long before the infestation took over the entire forest—hell, the entire city.

Back before Wanda met Jamie, she was a botany major. When Top Secret Lab contacted her, she’d wondered what the heck they needed with someone like her. She studied plants, not biological warfare, their mainstay. The through-the-roof-salary wasn’t anything to scoff at, however, and soon she found herself seated at the head of a mile-long table, accepting the fine print of the contract with a loopy scrawl on the dotted line. Sure, things like non-disclosure, gag order, and absolute submission sounded scary, but there was also the health benefits and retirement package. She hadn’t stood a chance.

Jessica sighed with relief when the Jeep came into sight. “Don’t you think we should search for Jamie?” She frowned and twirled a strand of multi-colored metallic hair. “Those plants—”

“Forget about the plants.” Jessica’s eyes widened and her lip quivered. Wanda bit back a retort. She didn’t need a sniveling teenager screwing up everything she’d worked on for the past three years. “I’m sure Jamie’s fine.” She rearranged her face into something she hoped resembled sympathy. Jessica, seemingly placated, climbed into the Jeep.

“So you’re really his girlfriend?” Jessica clicked her seatbelt into place and glanced at Wanda, expectant.

Ugh. Teenage girls. “Yeah—I’m all the rage.” Wanda slid in next to Jessica and checked the rearview mirror before slamming the Jeep into drive. No sign of the plants, no sign of Jamie. Either could be a good or a bad thing, depending how you looked at it. The Jeep bumped over the forest floor, the huge, off-roading tires disrupted the natural untended beauty. Beside her, Jessica white-knuckled the Oh, shit! handle on the door.

Top Secret Lab recruited Jamie long before Wanda. A prodigy in high school, Jamie’s work preceded him and he was reined in with the promise of steady cash flow. But Jamie, always precocious and too smart for his own good, experimented on the side. Initially, Top Secret Lab allowed his dalliances, writing them off as nothing more than meaningless creations. Then he’d created well—there wasn’t a name for it yet, but the plants were alive. No, that wasn’t right, either. They were conscious beings—with feelings. And they were capable of breeding.

Wanda snorted, drawing Jessica’s eyes. “So Jamie…he hasn’t been home in a while?” Wanda asked, stealing the opportunity to learn more about the evil genius she’d fallen for. It was wrong—so wrong—but like most bad things, if felt so right.

“No,” Jessica said. “He hardly even calls anymore.” They’d reached the road and the Jeep took to the asphalt much smoother than the unpredictable forest. Wanda steered toward town, relaxing as they entered the gentle glow of the downtown streetlights. Jessica rubbed at her arm, flaking off some of the gold skin. There was a long gash on her forearm, sealed over with a thick, gilded scab. Wanda jerked the wheel hard. The Jeep roared to a halt on the shoulder of the road, sending up a cloud of dust. Outside the window, a diner sign blinked on and off.

Flicking on the overhead light, Wanda leaned across the seat, snatching Jessica’s arm and holding it close to her face. “When did this happen?” Even under all the gold, Jessica’s skin paled.

“Earlier today?” Her eyebrows smashed together with worry.

“When, Jessica? How many hours ago?”

Jessica tried to pull her arm away from Wanda’s vice grip. “I don’t know. I think I passed out or something. I was with Gran. Oh no, Gran! We’ve got to help her. We need to go back to the house.” Panic made her voice high and breathy.

Wanda released her and leaned back against the driver seat, ignoring her comment about Gran. As far as Wanda knew, Gran was a lost cause. She was infected, and the elderly always turned faster than the young, sometimes within minutes. “How many hours?” Jessica’s chin quivered and Wanda fought the urge to roll her eyes. Teenagers. “Guess,” she prompted.

“It was this morning,” Jessica said finally, uncertain.

“Shit.” Wanda beat her palms against the steering wheel and a litany of curses not appropriate for young ears escaped her mouth. Jessica flinched away, hugging the passenger door. Wanda rubbed her forehead where a headache pulsed.

“Shit.” Wanda turned off the light and pulled the Jeep away from the shoulder, focusing on her motions. Turn the wheel. Stay between the lines. Check the mirrors. Use the turn signal.

What the hell was she supposed to do about this? Jamie’s experiment would be the downfall of his sister. His own sister! And if Wanda wasn’t careful, she’d be next. She watched Jessica out of the corner of her eye. Jessica hadn’t fully transitioned yet. They still had time.

Wanda licked her lips. Jessica was too intuitive. What to tell the kid? Sorry, your brother created evil plants that are trying to take over the world. Don’t worry Jessica; you won’t know you’ve turned into a plant-thing. It’ll feel great.

The forest was dark and heavy with the scent of growing things. Plants. My creations, Jamie thought, feeling a sense of pride swell through him. Velvet caressed his arm, stroking a warm leaf down its length.

They’d left the spot next to the river where the truth reeds grew. Next to him, Velvet’s bodyguard trudged along. Jamie eyed him, wary. His large, flat leaves were covered with tiny crisscrossed lines. Their broad surface could deflect bullets, stop sharp objects, and were essentially impenetrable. But the Teflon-plants were a 50/50 shot. Sometimes they were honorable, like green soldiers determined in combat, and other times, like Jamie had somehow gotten the formula wrong, they were evil, dark, destructive things. This one, however, seemed content to guard Velvet and follow Jamie’s instruction.

Or maybe that was Velvet. She snuck a leafy branch under his shirt and trailed it across his belly. Sighing, he shoved her away. Her leaves rustled, but because they weren’t near the river, he had no idea what she’d said, but he imagined she would be pissed, just like any other woman who was turned down.

Jamie and his plant companions reached the road. He’d lost his cellphone back in forest, so he had no way to contact Wanda. Pausing on the shoulder, he scratched his head and cursed his situation. He could walk. It was only a few miles to town. Velvet caressed his cheek, her leaves pinking. No, walking was out of the question. Anyone who drove by would catch Jamie and his leafy friends. Then he’d have a lot of explaining to do.

Headlights speared the darkness, catching Jamie and the plants in the beams. The three of them dove into the ditch for cover, but not fast enough. The vehicle screeched to a stop and Jamie recognized the tires of the Jeep. The interior light revealed Jessica, head resting against the window, her eyes shut. Asleep.

The driver door slammed and Wanda rounded the truck, hands on her hips. Jamie felt his mood lighten. Wanda. He’d been worried about her. She looked over the two plant creatures next to him, raising one eyebrow. Jamie tried to see them through Wanda’s eyes. Velvet was as tall as him, thick trunked, and covered with vines. The ends of her leaves were tipped with pink that deepened depending on her mood. She looked feminine, especially compared to the body guard.

Wanda’s eyebrow lifted clear into her hairline. “Oh yeah?”
Jamie cracked a smile. “No stripper jokes.” Velvet shimmied her leaves as though she appreciated the premise of being a stripper. Maybe she had been, back before she was a plant.

“And him?” Wanda gestured to the bodyguard.

Jamie shrugged and the plant preened, fluffing his bulky leaves to impress Wanda. “I was thinking about naming him Tank.” Tank puffed up further, clearly appreciating the name. Jamie grinned.

“And this is where we get to the bad news,” Wanda said.

“Did you forget your hearing aid? She’s turning into a plant, Jamie.” Wanda’s eyes wandered to the two before her. “No offense.” They both puffed and rustled. “She’s gold. It won’t be long now.”

Jamie scratched his chin. This complicated things. Jessica should’ve stayed out of the woods, hadn’t he always told her as much? Okay, maybe he hadn’t. He’d been too busy working at Top Secret Lab and creating the beauties next to him. But Jessica? Could he allow someone he knew to turn? He hadn’t realized when he saw her in the chapel that she was infected. Jamie’s mind had been elsewhere, on the giant tree that’d stomped toward town, for one—an issue they’d have to face, eventually.

“Well? What are you going to do?” Wanda’s hands were on her hips again. Jamie knew that pose. She was pissed and no amount of sweet talk was going to dig him out of this situation.

“Let’s have a look.” He followed Wanda to the car. Velvet and Tank stood by the side of the road, resembling, well, trees. Sure enough, when Jamie examined Jessica, he could see signs of the inevitable change. Soon the gold would give way to green. Jamie sighed.

While they were preoccupied with Jessica, another car pulled off the road. Jamie looked over his shoulder, irritated to see the person climbing from their vehicle.

“You folks need help?” The man asked, stepping into the line of the headlights.

“Distract him,” he told Wanda. She left his side and he touched Jessica’s face. “I’m sorry,” he whispered. “I never meant to involve you.” Jessica didn’t stir; her only movement was the rapid flickering of her eyes, lost somewhere in dreams. “I created them…” Jamie trailed off, brushing back his sister’s multicolored hair. “I created them and I have to protect them. I hope you understand.”

Wanda’s scream had Jamie whirling away from the Jeep. Tank and Velvet had grabbed the newcomer. With a sickening rrrriiiiippppp, they tore the body in half. Innards splattered the grass, loops of bowel, liver, spleen, kidneys. Jamie watched with horrified fascination as Velvet and Tank fed, their leaves and roots making squelching sounds as they liquefied and then sucked up the delicacy before them. Within minutes, all evidence of flesh disappeared. Stark white bones scattered the ground, and settled next to the skull, winking in the pale light, was a sheriff’s badge.

Rounding on him, Wanda fisted her hands. Her eyes sparked with fury and her throat worked as though the words, abrasive and sharp, got stock on the way out. Before she could scream at him, Jamie held up both his hands in surrender. “Hey,” he said, “they’ve got to eat, too.”