The Fault in Our Stars by John Green. (THERE ARE SPOILERS!! LOOK AWAY!) 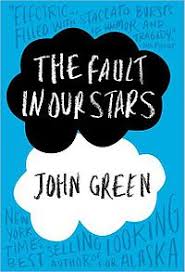 If I could fill this page with stars—big, giant, hand drawn stars—I would.

This is the kind of book that crawls under your skin and becomes part of you. It’s beautiful—not in an ostentatious I’m Ruler of the Writing World way, (though you are, John Green, you ARE,) but in a gentle, raw, I Will Shove Your Face in this Shit and RIP YOUR HEART OUT until YOU FEEL EVERYTHING. You read correctly, I started that description with gentle.

Following, you will find my musings on The Fault in Our Stars. I can’t promise a review, I suspect it’ll vary between review/idolization/ranting/blubbering/blabbering. I love John Green. I knew this when I read Paper Towns. I knew it when I read Looking for Alaska, but John Green beat the ever-living life out of me with The Fault in Our Stars. (Pun intended.) This is the kind of book you have to walk away from just to get your head on straight again.

The first mistake I made after finishing was to hop on Goodreads to see the other reviews. People are idiots (see, here’s the ranting!). John Green’s characters are multi-faceted. They have depth and range and history and emotions that make them SO REAL. (Who cares if the characters in all his books are similar?) They’re quirky and precocious, and (IDIOT GOODREADS PEOPLE) they’re often wrong. That’s what makes it like crawling inside their bodies and viewing their trials and triumphs from their eyes. They’re not pretentious, they’re human. They’re teenagers, and the exploration of concepts they don’t fully understand is REALISTIC. People complained that they spoke as world-weary adults, but I disagree. You see, the people who bitched about them using concepts out of their (apparently too young, hormone addled, inferior) range, didn’t understand the concepts. Hazel and Augustus got so many things wrong. But you see, dear idiot readers, you didn’t understand the concepts to begin with, so you couldn’t see how Hazel and Augustus used them for comfort and to suit their own needs. Life isn’t about always being right, or always using “concepts” socially acceptable for a (apparently too young, hormone addled, inferior) teenager. It’s like reading a poem. Maybe you see a flower, maybe I see a grave. Neither one of us is wrong, but you’re definitely still an idiot.

Whoa. That was a confusing tangent that I hope at least one person followed.

The point of all that rage is to say that, just because they haven’t experienced (or taken the TIME to experience) intelligent, witty, and the downright authentic youth of today, doesn’t mean they don’t exist. And they (the idiot readers who don’t get it) probably shouldn’t be reading John Green. Because teenagers really ARE like his characters. Maybe not all of them, but a lot.

Let’s start with Hazel. She’s terminal, you know this when you pick up the book. Stage IV thyroid cancer with mets to her lungs. She’s plodding along, not happy, not sad, just kind of there. She doesn’t have a lot of relationships because she knows she’s going to die. Which is both selfless and selfish, depending on who you ask. She’s 16, a part time college student with a GED, because normal school was just too much for her, especially since she carts around an exceptionally annoying third wheel, aka the oxygen tank. She attends a support group, physically, not mentally, and watches a lot of television with her two best friends—her parents.

Then we meet Augustus. He’s 17, a survivor of osteosarcoma, with an amputated leg and a prosthetic replacement. He’s cancer free, but attending support group with his friend, Isaac, who only has one eye and is about to lose the other.

At first, Hazel is very careful with Augustus, keeping their relationship strictly in the friendzone. She compares herself to a grenade, literally a ticking ball of shrapnel, just waiting to explode and maim everyone she cares about.

Hilarity ensues. Isaac goes blind, Hazel goes into ICU. Many cancer jokes are made—and not in the haha cancer is hilarious way (because it’s not hilarious), but Our Lives Suck And The Only Thing To Do Is Laugh. A lot of people were offended by this, I think. But I must refer back to my teenager sentiment. They’re TEENAGERS. And human. We often joke about things are not funny. Sometimes, you have only two choices, laughter or tears. Which would you rather have?

They spend a good portion of the book tracking down the author of the Not a Cancer Book cancer book, An Imperial Affliction, which, according to the character’s descriptions, plays out pretty closely to Hazel’s life. My first clue that something is wrong with Augustus is when he tells Hazel about his Wish and she’s surprised that he still has it after all this time of being cancer free. Whoa. Red light. Not Augustus, please NOT AUGUSTUS.

You pick up a book about a terminal cancer patient, you EXPECT someone to die. (And you’re gonna cry, because you cry when awesome characters die. Also when they have sex…just me? We always knew I was fucked up.)

FOR THE LOVE OF GOD NOT AUGUSTUS.

Anyways. They go to Amsterdam and meet the author. He’s an asshole, alcoholic loon. There’s a few small hints of Augustus saying his hip/leg hurts. NO. WHY? WHY AUGUSTUS? It’s in Amsterdam that Hazel realizes that she loves him, or at least admits it. Here is this beautiful boy, who allowed her to hijack his Wish, and complete her dream of meeting Van Houten and demanding the ending to An Imperial Infliction (which she doesn’t technically ever get, unless you count the hamster.).

After Van Houten berates them, insults them, and is generally an asshole, alcoholic loon, they kiss for the first time where Anne Frank hid from the Nazis. I really, REALLY enjoyed this scene. Especially after they both struggle up the stairs (Hazel, with her under-functioning lungs and Augustus with his prostetic leg). The other tourists clap for them. It’s sweet, heartbreaking, and for the characters, a little embarrassing. From here, they go back to Augustus’s hotel room and have sex. I’m not going to sugar coat this. It’s romantic and sweet, but also awkward and nerdy and filled with setbacks from the cancer. There’s the prosthetic, the oxygen tank, etc.

Also, Hazel’s love letter to him is priceless…am I right?

Then Augustus tells her that his cancer is back. With mets. Everywhere.

The boy who has been her rock, who was supposed to outlive her, has suddenly inverted fate. The real beauty of the story is from their role reversal. Augustus, who starts out strong and healthy, slowly declines, until Hazel realizes for the first time that she’s the healthier one. It’s a heartbreaking downward spiral. While John Green doesn’t smoosh your face in all the awful, he doesn’t shy from it, either. There’s piss and vomit and tubes and hopelessness.

There are so many things I want to talk about—why I loved this book as a reader and why I LOVED this book as a writer. How the author’s note at the beginning is SO TRUE, especially when you’re an author. How the story is SO REAL, brutally honest, while remaining respectful. It approaches the great questions we all have, Will I Be Remembered? Will I Leave A Mark? It’s humble. Humiliating.

When I say you have to read this book, I mean, YOUR LIFE DEPENDS ON READING THIS BOOK. YOU MUST YOU MUST YOU MUST. I’ve learned so much from John Green, both for writing and life. The Fault in Our Stars kind of turns you sideways, forcing you to look at life from new angles. I kept a notebook next to me while I read so I could take notes.

Now, I will share some of my favorite quotes, though truthfully, I wish I could just quote the entire book RIGHT THIS SECOND VERBATIM. I plan on dog earring the pages.

“I was left on the shore with the waves washing over me, unable to drown.”

“I thought being an adult meant knowing what you believe, but that has not been my experience.”

“Grief does not change you, Hazel. It reveals you.”

“My thoughts are stars I can’t fathom into constellations.”

If there is one book you read this year, let it be this one.

John Green is a genius. Some kind of wizard, to be sure.

THIS IS THAT BOOK.

7 thoughts on “THE FAULT IN OUR STARS – JOHN GREEN”