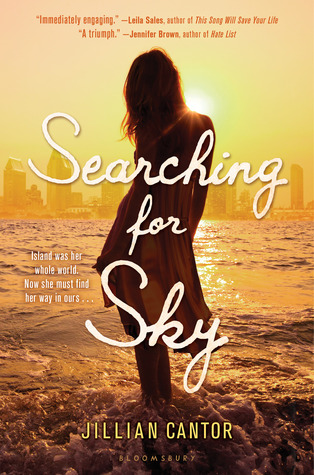 Searching for Sky by Jillian Cantor

Available May 13, 2014 from Bloomsbury USA Childrens

Sky and River have always lived on Island, the only world they’ve ever known. Until the day River spots a boat. Across Ocean, in a place called California, Sky is separated from River and forced to live with a grandmother she’s just met. Here the rules for survival are different. People rely on strange things like cars and cell phones. They keep secrets from one another. And without River, nothing makes sense. Sky yearns for her old life where she was strong and capable, not lost and confused. She must find River so they can return to Island, but the truth behind how they ended up there in the first place will come as the biggest shock of all.

I received a digital copy of this book from Netgalley in exchange for an honest review. I am in no way compensated for my opinion.

Sometimes you come across a book that makes you question everything you believe. Searching for Sky was that book. The premise of “reverse dystopian” hooked me right away, especially because it seems every YA book is dystopian now. It was refreshing to look at the world from a different angle.

The concept is simple. Sky and River grew up on a remote island with Sky’s mother and River’s father. When I say remote, I mean, they literally have made do with only what’s on Island. They eat fish from Ocean, they made Shelter out of things on Island. There are no other people. There’s no technology. There’s nothing but their parents and them and what Island provides.

The story unfolds beautifully, in layers, in such a way that feeds the reader’s hunger for knowledge.

When Sky and River’s parents die, River breaks his father’s rules and lights a fire on the beach. They’re rescued by a boat the next day. What follows is a complex attempt at assimilation in modern society. Sky and River were originally from California, but it’s nothing like they’ve ever known. Sky, whose real name is Megan, is still a minor, and is claimed by her maternal grandmother. River, technically an adult, is released into the modern world with nothing.

Searching for Sky makes you ask questions. What makes an evil person? Is it being a murderer, or is it taking happiness away from a child who doesn’t know any better? What is truly right and what is truly wrong? What determines the right to have a voice? Is it book knowledge, or is it life itself?

The writing itself is poetic. Sky and River don’t view the world the same as everyone else. They don’t have words for things, they don’t understand technology, money, evil. Watching them try to interact in a world they can’t fathom was heartbreaking. It made me question what is important in life and what things I could do without. It made me question morality and how far someone would go to protect their child.

This book will take you on an emotional roller coaster. I read it “cover to cover” in one sitting. It’ll make you laugh, it’ll make you cry, it’ll make you think. Beautifully written, with rich nuance and attention to detail, Searching for Sky is a book that will haunt me long into the future.

One thought on “REVIEW – SEARCHING FOR SKY BY JILLIAN CANTOR”