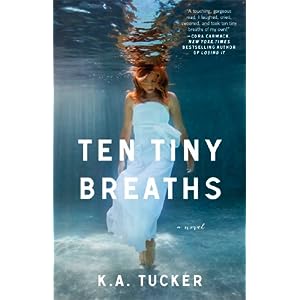 Kacey Cleary’s whole life imploded four years ago in a drunk-driving accident. Now she’s working hard to bury the pieces left behind—all but one. Her little sister, Livie. Kacey can swallow the constant disapproval from her born-again aunt Darla over her self-destructive lifestyle; she can stop herself from going kick-boxer crazy on Uncle Raymond when he loses the girls’ college funds at a blackjack table. She just needs to keep it together until Livie is no longer a minor, and then they can get the hell out of Grand Rapids, Michigan.

But when Uncle Raymond slides into bed next to Livie one night, Kacey decides it’s time to run. Armed with two bus tickets and dreams of living near the coast, Kacey and Livie start their new lives in a Miami apartment complex, complete with a grumpy landlord, a pervert upstairs, and a neighbor with a stage name perfectly matched to her chosen “profession.” But Kacey’s not worried. She can handle all of them. What she can’t handle is Trent Emerson in apartment 1D.

Kacey doesn’t want to feel. She doesn’t. It’s safer that way. For everyone. But sexy Trent finds a way into her numb heart, reigniting her ability to love again. She starts to believe that maybe she can leave the past where it belongs and start over. Maybe she’s not beyond repair.

But Kacey isn’t the only one who’s broken. Seemingly perfect Trent has an unforgiveable past of his own; one that, when discovered, will shatter Kacey’s newly constructed life and send her back into suffocating darkness.

I really, really wanted to like this book so I’m going to try to be as constructive as possible. Ten Tiny Breaths is the very first “new adult” book I’ve read. I’ve kind of avoided the genre since it became a thing because I was worried I’d be disappointed. Sadly, I was right. Now, I know that’s a lot of pressure to put on a book, and I’m not going to judge the entire genre based on one book, however, if every new adult book focuses on sex so much, I’m probably out.

Also, the main character and I share a name, “Kacey.” This book is in first person present tense. Let me just tell you how awkward that was to read. But, overall, I guess the book did its job, because I was incensed enough to write a review.

Ten Tiny Breaths focuses on the lives of Kacey and Livie Cleary as they recover from their broken past. They move from Grand Rapids to Miami to start a new life for themselves. Kacey is 20, with a hard exterior and a broken heart. Livie is the opposite of Kacey, at 15, she’s warm and outgoing. They complement each other as much as they contradict one another.

Kacey takes a job as a waitress at a local strip joint while Livie goes to high school.

Enter the bad boy next door, Trent. He’s sexy, he rides a motorcycle, he’s basically the hero you want to see shirtless on every page of the twelve month calendar. I liked Trent a whole lot. He was the ideal mix of sensitivity and sexuality that you want to see in a male protagonist (but you never seem to find in real life!).

As the story unfolds, we learn the Kacey lost her family, her boyfriend, and her best friend in a horrific car crash. Kacey was in the middle in the back seat, and was forced to listen to her mother take her last breath and hold her dead boyfriend’s hand until the cops could cut her out of the vehicle hours later. The author did really well painting the picture of horror that Kacey experienced as well as the PTSD she suffered afterward. Kacey dabbled in drugs and alcohol and sex, seeking to numb herself from all the pain.

Here’s where I started not liking the story.

As soon as the reader finds out that someone in the drunk driver’s car lived, (spoiler) I knew it was Trent. I suspected it was Trent in the first few chapters when the landlord muses about how he got two rentals by email back to back. It was so glaringly obvious that I spent 90% of the book just waiting for him to be outed. Of course, the author did lots of things to divert attention away from him. His name is changed. He questions Kacey about the accident, about the guy who survived. His parents live in Rochester, New York, not Grand Rapids, Michigan. Still, I caught on way too quickly to be satisfied by the explosive ending I was promised. Maybe it’s the author in me.

There was too much sex for me, and not enough story. I know that sounds…wrong, since I think they only technically have sex twice in the book. However, Kacey spends an enormous amount of time pondering how much Trent turns her on. There’s a lot of dry humping and groping. I just…I wasn’t impressed. I felt like it took away from the story instead of adding to it. It made the story about sex, when it was supposed to be a sweet story about empathy and forgiveness. There’s a particular scene that really bothered me. When they have sex for the first time, Kacey says that Trent completes her as he enters her (or makes her whole, or something like that). Seriously? I want to throw up. I would’ve been so much more impressed if Kacey had found another way to be complete…which she does by the end of the book. Her dependence on Trent to make her whole made me sad. I wish she could’ve found a way to face her PTSD that didn’t involve fucking her neighbor. That’s right. I said it.

There were a LOT of things I really liked in this book. Kacey is a badass. She’s trained hardcore as a kick boxer and spends a lot of the book running around hitting guys. She doesn’t take any shit. From anyone. She’s fiercely loyal to her sister and the new friends they make in Miami. As a character, I think she’s well rounded and believable. (Even if her guy dependence makes me sad for her.) I think the author did a good job of fighting stereotypes, with the strip club providing an interesting backdrop for Kacey to make her new start. I like that there’s room for characters to surprise you, especially when they come off a little rough around the edges at the beginning.

I think this book had the potential to be very sweet and heartwarming. There seems to be a “bar” set for new adult. It’s young adult, except with pages and pages of sex (which apparently isn’t allowed in YA). I think I could grow to like this genre, once it realizes that it doesn’t have to prove anything by pushing sex in the reader’s face. I would’ve been tons more satisfied if there had been a build up to the sex, instead of having hormones raging on almost every page. I don’t want porn. I want a story. Ten Tiny Breaths was almost there, but just fell short of hitting me in the feels.